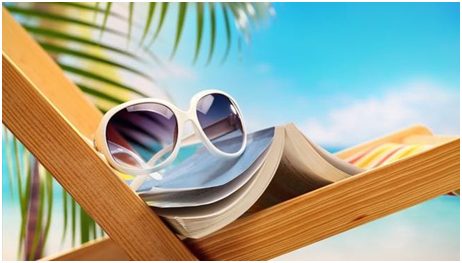 It might be just barely summer, but that doesn’t mean we can’t make our way to the poolside or lounge at the beach—and the relaxation that comes with them. But the old definition of a "summer book" as a throwaway novel just won’t do: one size definitely doesn’t fit all. Here’s a list of new and upcoming reads to serve a wider spectrum of warm-weather experiences. Find everything from the calm, cool relaxer to books that transform downtime into an opportunity to stretch your limits.

Some Possible Solutions by Helen Phillips

Helen Phillips’s stories are endlessly funny and razor sharp—and, okay, a little weird—filled with strange scenarios that’ll have you asking, "What if?" Playing with sci-fi and surrealism à la Kafka, we meet futuristic strippers and characters of ambiguous genders in worlds that are just slightly off. We explore how our relationships with each other may not be quite what they seem.

Rich and Pretty by RumaanAlam

We’re not fast and loose with the term "love" around here, but we’re going to say it: Rich and Pretty is a novel you may well fall head over heels for as the perfect summer read. Following two close long-term pals in New York City whose lives begin to take diverging tracks, RumaanAlam beautifully frames the nuances of female friendship: that complex alchemy of expectations and envy, and how they chafe with a lingering deep affection for each other. And did we mention he’s a guy writing about this stuff? It manages to be pitch perfect and wise—and, no, not mansplainy.

What’s going on at Marrow Island? That’s the question journalist Lucie Bowen is trying to answer in Alexis Smith’s eerie novel. Twenty years prior, an earthquake turned this Pacific Northwest island into an environmental disaster zone. But now, a mysterious colony has sprung up on Marrow Island, and Lucie’s instincts tell her something’s awry. Smith’s excellent command of language gives life to arresting characters and their creepy surroundings, keeping the suspense in this dark environmental thriller running high.

Alice Adams’s Invincible Summer follows four British college friends over 20 years, tracing the ties that bind them together as well as the things that pull them apart. At its core, the book is mostly about how people keep relationships intact, chronicling the lives of her characters as they go from being college students to thirtysomethings. Invincible Summer depicts what happens when things move out of the dream stage and reality starts to bare its teeth. Easy yet not insubstantial, this debut is a sweet toast to enduring friendship.

An Innocent Fashion by R.J. Hernández

Lose yourself in the world of a fictional fashion magazine with An Innocent Fashion, the story of an idealistic dreamer who wants to shed his working-class Texas background and climb the ladder at cutthroat mag Régine. But, like counterparts in the The Devil Wears Prada before him, Elián—now reinvented as Ethan—quickly finds the realities of media to be a lot less cushy than he imagined. Hernández creates a hybrid coming-of-age story mixed with a fashion industry tale that’s fast-paced and full of drama.